We Acknowledge the land we work on

Below are the land acknowledgements from each of our programs. Conservation Legacy recognizes the importance of honoring the historic relationship Indigenous people established with the land prior to colonization. In our organization-wide efforts to create a more inclusive culture, it is imperative that we establish a shared practice for acknowledgement of the land as an initial step toward reconciling our complex history of national public lands. Each regional program has created their acknowledgement statement unique to their region and intended audience.

Goals of a Land Acknowledgement statement:

Some helpful resources about traditional lands can be found in a PDF here.

The Evolving Acknowledgement of the Land

Click on each corps below to learn about the history of the land we work on, the people that live there, and the original stewards.

Ancestral Lands Land Acknowledgement: We are the descendants of the original stewards and care-takers of these lands. Our lifeways include the recognition that human beings are but one component of the ecosystem and natural world. We strive to continue the legacy that our ancestors left to us: living in healthy relationship with the land, water, air, and all the inhabitants of these ecosystems. Our people have lived in connection to these sacred lands for generations and will continue to protect and learn from them.

We acknowledge that these places have been objectified and exploited for the comfort and benefit of the privileged few. Displacement of our ancestors from our homelands and the continued trauma experienced by our people is not only acknowledged, but remembered and re-lived through current systemic injustice. Stewardship involves a constant acknowledgement of these truths and a disruption of the continuing efforts to damage the lands and the inhabitants thereon.

Appalachian Conservation Corps Land Acknowledgment: Before we begin working on this land, we want to acknowledge that we are on the traditional territory of the Monacan Nation. As we work to preserve and protect our lands, we believe it is crucial to be mindful that our now public lands were once home to thousands of indigenous communities who were eradicated from their homes. If we do not recognize this piece of history, then we feel we will never be able to truly foster an inclusive environment for all to feel welcomed and valued, and have a positive experience working directly on our lands.

Arizona Conservation Corps & Conservation Corps New Mexico Land Acknowledgement: We want to acknowledge that our offices are on the traditional lands of the Hohokam, Western Apache, Hopi, Diné, Tohono O’odham, Pascua Yaqui, White Mountain Apache, Chiricahua Apache, Sobaipuri, Pueblo, and Mescalero Apache peoples, who have been stewards of these lands since time immemorial.

As we work in conservation and protection of what are now known as public lands, it is important to provide an acknowledgement that this is stolen land. The narratives of these lands and regions have long been told from one dominant perspective, without fully recognizing the people who lived here before colonization, and continue to live here today. We are not seeking apologies; we are asking for accomplices to dismantle the systemic inequities and false stories. Thank you for your respect in acknowledging this important history as we move forward in our work with Conservation Legacy.

Central Staff Building Land Acknowledgement: Welcome to the Commons Building, operated by the Southwest Institute for Education and Conservation. We want to acknowledge that we are on the traditional land of the Puebloan and Ute* tribes, who have been stewards of this land throughout generations. Today, the Mouache and Caputa bands comprise the Southern Ute Indian Tribe headquartered in Ignacio, and the Weenuchiu band is now known as the Ute Mountain Utes and are headquartered in Towaoc. The Navajo or Diné people also recognize Hesperus Peak – the tallest in the La Plata Mountain Range -as one of their four Sacred Mountains called Dibé Nitsaa, which translates as Big Sheep. As you join our building’s diverse community, it is important to provide an acknowledgement that we are gathering today on stolen land. The narratives of this land and region have long been told from one dominant perspective, without fully recognizing the people who lived here before colonization, and still live here today. Thank you for your respect in acknowledging this important history.

Conservation Corps North Carolina Land Acknowledgement: Welcome to Camp Slocum, operated by North Carolina State University as part of their G.W. Hill Research Forest. We want to acknowledge that this land was once the traditional land of the Shakori tribe. The Shakori were a Siouan people, a language group shared with several tribes, some of the most well-known living in the Great Plains. The Shakori were closely allied with other nearby small tribes such as the Eno when the English colonized this area in the 17th century. It is thought that the Shakori eventually assimilated with other tribes in the first half of the 18th century and eventually became part of the powerful Catawba Nation along the Catawba River. The headquarters for the Catawba Nation today is in Rock Hill, South Carolina. They are a federally recognized sovereign tribe. As we use this land, it is important to acknowledge that it was stolen from the Shakori. English colonists did not pay for it. The tribe was decimated by colonial smallpox, warfare, and cultural disruption. The stories of this land have long been told from one dominant perspective without fully recognizing the people who lived here before colonization. Thank you for respecting this important part of the land’s story.

Southeast Conservation Corps Land Acknowledgement: As we begin this term of service, we would like to take time to acknowledge that the land we are on here in Chattanooga is the traditional territory of the Cherokee people. Throughout your time with our program, you may travel to areas that were inhabited by thousands of groups of Indigenous peoples. We at SECC feel that it is necessary to recognize Native communities who stewarded this land before European colonization; to recognize people that were forcibly removed from their homes and assimilated. As we work to preserve and protect the land, we feel that it is crucial to recognize this history in order to create an honest, open, inclusive culture.f

Southwest Conservation Corps - Four Corners Land Acknowledgement: Today we want to recognize the original stewards of the land we are occupying and working on. The land we stand on is the traditional land of the Puebloan and Ute tribes, who have taken care of this land for generations. Members of the Weenuchiu band are now recognized as the Ute Mountain Utes, headquartered in Towaoc, and the Mouache and Caputa bands make up the Southern Ute Indian Tribe headquartered in Ignacio.  Additionally, Hesperus Peak, the tallest peak in the La Plata Mountain range, is one of the four sacred mountains of the Navajo, or Diné, People. It is important to acknowledge that we are working on stolen land. The main narrative of this area has been that of the dominant voice, without the recognition of the people who lived here before colonization and their descendants, many of whom still live here today. It is important to know that this statement is not made to ask for apologies or guilt. We are seeking to create accomplices to help to dismantle the false narratives and oppression of the original habitants of this space. Thank you for acknowledging this history with us as we begin and continue our work with Southwest Conservation Corps.

Southwest Conservation Corps - Salida Land Acknowledgement: Welcome to Salida, Colorado- home of Southwest Conservation Corps, Los Valles Region and we are on stolen land. Our entire service area, from the San Luis Valley, up the Upper Arkansas River Valley along the Collegiate Peaks, and into South Park is within the traditional land of the Ute People. The Mouache band lived in the eastern Rockies from Denver to New Mexico – along the Front Range and the West Mountain Valley, and the Caputa band lived east of the Continental Divide and south through the San Luis Valley. Both bands are known today as the Southern Ute and they are headquartered in Ignacio, Colorado. The southernmost tip of Los Valle’s range runs into the traditional land of the Jicarilla Apache and to the north, the Cheyenne. The Spanish settlement of the San Luis Valley is also a vital part of the story of this area. It is important to us that we continue the Ute tradition of stewardship of this land and as you travel around and work these trails, you’ll see their names, Tabeuache, Weminuche, and hear their words, Saguache. Please take a moment to acknowledge the people who came before us, appreciate how resilient they were in this challenging environment. They did not migrate to this place. In their own words – they have always been here and will always be here.

Feedback on any of our Land Acknowledgments above are welcome!

Donate to Conservation Legacy for #GivingTuesday!

Join the global generosity movement: #GivingTuesday is on Dec 1st! Support healthy land, air and water with a contribution today. 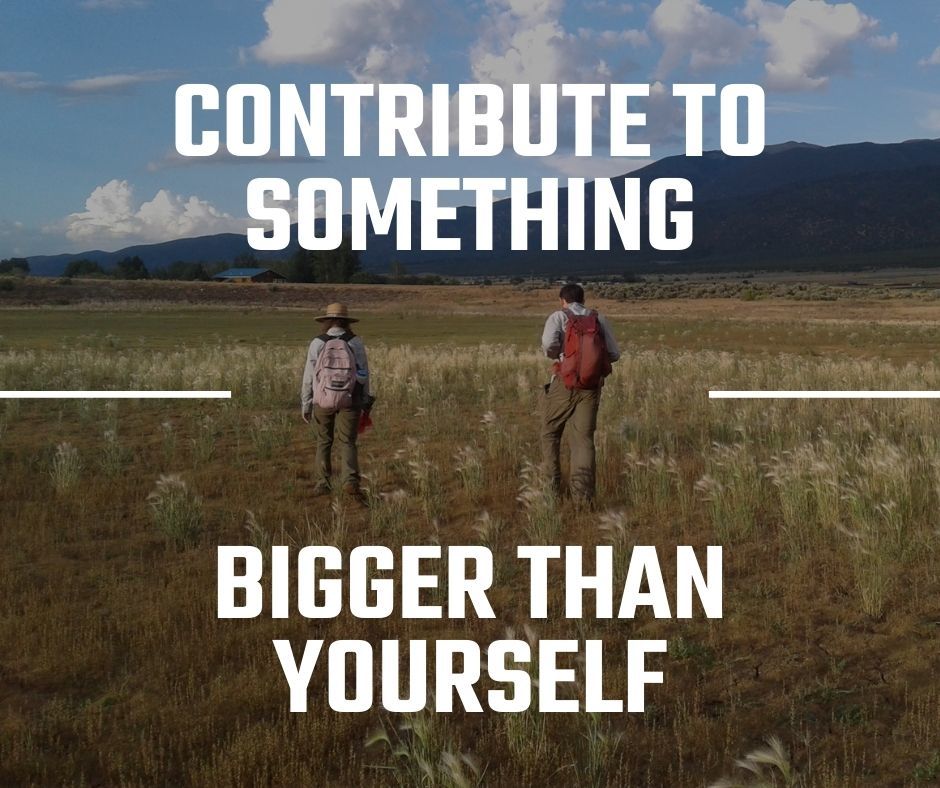